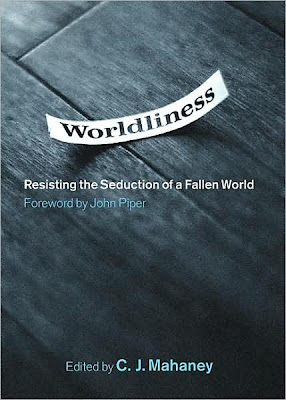 With a Foreword by John Piper, and cover blurbs from the likes of Randy Alcorn, D.A. Carson, and Mark Dever, this little collection of essays would seem to be the perfect tool for helping Christians grow in their faith. The subtitle gives the reader the gist of the book: Resisting the Seduction of a Fallen World. This is not an effort to identify worldliness as much as an attempt to remind Christ followers of the need to be separate from the world.

The editor, Mahaney, sets the stage for the scope of the book with the first (I’ll call them) sermon. The focus of the book is on a verse in 1 John (2:15) which reads, “Do not love the world or anything in the world.” An explanation ensues to put into context the difference between the term world John uses here and when he writes “God so loved the world . . .” in the gospel bearing his name.

Other sermons included in the collection deal with the Christian and Media (Craig Cabaniss), Music (Bob Kauflin), Stuff (Dave Harvey), and Clothes (Mahaney). The final entry is a work by Jeff Purswell on “How to Love the World”.

This book will be a challenge for some, a stumbling block for others, and just another book to still others. It is not a book for a wide-ranging audience. It is written to help Christ followers grow in their walk with the Master. It will likely anger many of those who number themselves in the Christian community because of the high standard that is espoused. The writers themselves admit to struggles with meeting the ideals put forth in the writing.

In general, I find the collection to be faithful to the Scripture. The authors take to task a generation of believers who have allowed worldliness to infiltrate their numbers to the point of being no different from the world. It is because of this worldly trend in the church that many readers will get angry and toss the book out the window. It is also this trend that makes a book like this sadly necessary.

As with any book of this type, some readers will latch onto the truths pointed out and use them as a sledgehammer to cream their neighbors with. Giant football fingers will be donned to point at the sinners who need to take this chapter or that to heart. Many will use the essay/sermons in this little book to gain new heights in legalism. Such is the danger of any book like this—and often of any sermon that takes seriously the teachings of Jesus and the Apostles.

Most of the chapters dealing with specific areas where worldliness is increasingly tempting are well written and founded faithfully to scripture. While the fashion chapter is lopsided toward women and can be seen as chauvinistic, Mahaney points out the reasoning behind his focus on women’s fascination with worldly fashion.

The closing chapter is probably the least coherent of the essays and might seem a little awkward in a book designed to help us turn away from the world.

Included in the book are thought questions for each chapter and a couple of appendices which address more specifically ways that women can be more scriptural when choosing the clothes they wear.

I don’t recommend this book for wide circulation—even among the Christian community. I do, however, believe that this would be an excellent tool in the hands of someone who desires to become more like Christ. Because of the concerns I have with the book being used as a foundation for l

egalistic finger pointing, I have to hold it to three out of five reading glasses.

It's That Time of Year Again!

Send your own ElfYourself eCards 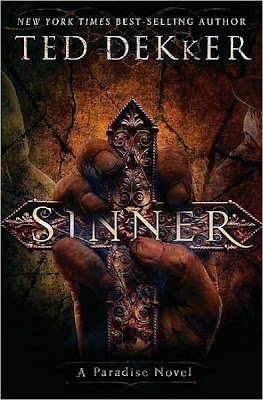 I tested my on-again, off-again reader’s relationship with Ted Dekker the past couple of weeks. Dekker is the breakthrough author of books that have loose connections (or not so loose connections) with each other. His early works thrilled the Christian reading community because they followed the age-old pattern set by pioneers in the Christian fiction industry. I believe that the departure from this well-worn path started with Thr3e. The stretching of his writing wings brought in an entirely new readership for Dekker. It also prompted me, from time to time, to liken Dekker’s writing style to that of mainstream novelist Stephen King. Dekker’s good with words, and this latest release is an excellent example.

For this effort we were on-again. Sinner is the culmination of a trilogy of books set in . The story begins in Showdown where we learn about the Books of History into which a young boy, Billy, has written pure evil. And Evil’s name is Marsuvees Black. The story continues in Saint, the not-so-engaging story of a grown-up Johnny (who helped facedown Black in Showdown in order to save his hometown).

In this third effort, we follow the lives of the three children (Billy, Darcy, and Johnny) all grown up and learning to deal with special “gifts” they had written into the Books of History for themselves in order to defeat evil wherever they found it. Thirteen years after the destruction of the monastery outside of where Billy and Darcy spent their childhood years, we find them young adults discovering that Billy can read the thoughts of people he is looking at and that Darcy can control the actions of people with her voice.

Armed with their new talents, these two young people wind up in where they help a select council of the elite to change the Constitution in order for Tolerance to be the law. In rewriting the Constitution, most religious jargon becomes relegated to the arena of hate speech.

Side stories include the coming to faith of a young witch named Kat, and lynchings and riots orchestrated by Black behind the scenes setting the stage for the aforementioned law change.

Fans of Dekker and his later writings will lap up Sinner. Readers who were turned off by the edginess of stories like Red, White, and Black will find Sinner to be more of the same. Readers outside Christian circles may find the text a bit too preachy for their tastes, but the story flows well. Dekker includes his trademark plot and character twists which keep the reader interested and guessing.

All in all this one is worth being on-again with Dekker. I give it four reading glasses.