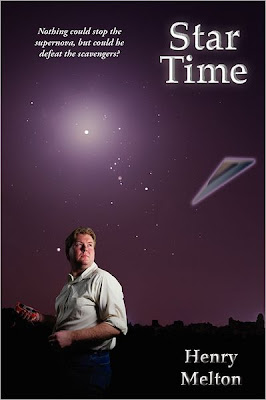 As promised in an earlier post, here is a review of Henry Melton’s debut story in The Project Saga, Star Time.

Life is going on as usual (or at least as usual as it can) for the residents of Austin, Texas and the surrounding area. And then warnings of ensuing danger explode. Enter a witch, a wizard, and a seer (so designated in the reading) and you have fodder for a great Science Fiction series. The title of the book refers to the moment when the lives of Sharon Dae (the witch), Abe Whiting (the wizard), and Ed Morgan (the seer) are thrown into turmoil by the death of Betelgeuse, a star in the Orion Constellation. Radiation spikes and night-time instabilities throw the entire Earth into a frenzy.

Hiding in the shadows of the sky are is a spaceship filled with a race of hunters—aliens who are looking for a treasure world filled with new prey. The treasure for the reader is the numerous tales that can follow the lives of those captured by the aliens in the process of keeping the invasion at bay, the robotic community left behind to pick up the pieces in post-star Austin, an the scientific followers in Australia who provided the first global warnings of the supernova that was Betelgeuse.

The building of the foundation is so intriguing that you want to keep up with all the characters—which Melton holds in promise as he unveils new titles in the Saga. To tide us over he’s included two bonus short stories at the end of Star Time to give a glimpse at the variety of the upcoming novels in the series. As with all of Melton’s books, you’ll want to read every drop. (Four out of five reading glasses.)

[This book was provided for review by Wire Rim Books of Hutto, Texas. Opinions are my own.]
Posted by Benjie at 9:40 AM No comments: 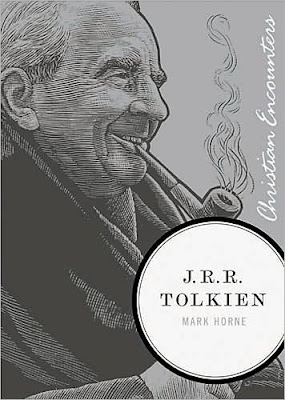 © 2011 Thomas Nelson, Nashville
I have not historically been a big fan of J.R.R. Tolkien. It took four or five starts with The Hobbit before I could make it past chapter 3. I have never been able to make it through a reading of the Lord of the Rings trilogy. I have, however, enjoyed the movies based on the trilogy, and I am aware of Tolkien’s contribution to modern literature and the fantasy genre. I also have a high respect for his writing whether I can sit through it or not. So when I had the opportunity to read Mark Horne’s short biography (written with a special attention to Tolkien’s faith, according to the series) I thought I might enjoy learning more about the creator of Middle-Earth.
From the packaging and the cover information, I expected the book to be more or less a work targeted for young adult readers who were interested in the subject’s contribution to literature with a Christian slant. And for what it’s worth, Horne develops a fairly good life-sketch of Tolkien from birth to death, with particular attention to the man’s writing. This is after all, the main contribution Tolkien had. Periodically, Horne makes a point to highlight Tolkien’s Roman Catholic faith, as well as his influence toward C.S. Lewis’s conversion.
If the work is aimed at reaching young adult readers, it falls short simply because the scholarship used in writing it leans towards the academic. That said, this same scholarly research tends towards the research paper style and at its very best the book reads more like a term paper rather than a well-oiled biography.
In regards to the Christian Encounters series (of which this is the only volume I have read, but which includes works on notable historical figures from St. Francis to D.L. Moody, from Churchill to Buckley and a whole list of others), if all of the biographies treat the Christianity of their subjects as this volume did, I fail to see the point of emphasizing Christianity in the title.
To say I was disappointed hits the mark on a variety of levels. Did I learn some things about Tolkien? Of course. Was the book one which will stick in my memory? I doubt it. I’d grant one and one-half reading glasses to this effort and hope that the other volumes in the series find their mark better.

—Benjamin Potter, August 10, 2011
[Disclosure of Material Connection: I received this book free from the publisher through the BookSneeze.com <http://BookSneeze.com> book review bloggers program. I was not required to write a positive review. The opinions I have expressed are my own. I am disclosing this in accordance with the Federal Trade Commission’s 16 CFR, Part 255 <http://www.access.gpo.gov/nara/cfr/waisidx_03/16cfr255_03.html> : “Guides Concerning the Use of Endorsements and Testimonials in Advertising.”]
Posted by Benjie at 5:15 PM No comments: 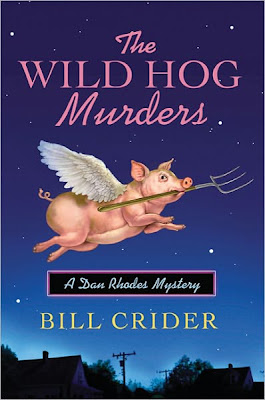 © 2011 St. Martin’s Minotaur, New York
Bill Crider just can’t stop cranking out good stories. And all his readers are glad of it. July was the release date of the latest in the escapades of Sheriff Dan Rhodes with his deputies, Ruth Grady, Buddy, and Duke, and his jailhouse staff, the laughable Hack and Lawton. With Ivy and the dogs (plus a cat) at home, Sheriff Rhodes is living the dream life. I always know I’m in east Texas when I’m reading a Sheriff Dan Rhodes story—and this one took me back early on when even the high sheriff said the criminal was “off in the woods somewhere.”
Or so it would seem if convenience-store robbers wouldn’t wind up dead in the middle of the woods where hog hunters are stirring up a whole herd of feral hogs. This isn’t the first time these wild hogs have played into an investigation, and as prolific as they are, I suspect Rhodes will encounter them again someday. In the course of his investigation of an imported (from Arkansas) criminal named Baty (our dead body), the famous television bounty hunter fugitive recovery agent, Hoss Rapinski, hits the scene and almost immediately joins Baty at the funeral home that is the county morgue.
Included with all the colorful characters are some repeat offenders in Blacklin County. The Eccles cousins find themselves suspected again. Rapper and Nellie, the two-man motorcycle gang that repeatedly gives Rhodes problems put in an appearance (and we even learn more details about Rapper—read the book to find them out for yourself). And county commissioner Mikey Burns continues to hound Rhodes with worthless ideas—like employing “Robin Hood” to rid the county of the incessant feral hogs.
Climb out on the porch, pull up a rocker and a nice big glass of sweet tea (or better yet Dr Pepper from Dublin, Texas, where they still use sugar as sweetener), grab your copy of The Wild Hog Murders, and enjoy. Five reading glasses for a fine story.

And now for that interview:

I first met Bill Crider in English class--he was one of my early college professors at Howard Payne University. After we had both moved on, I found out he  had started publishing books. I started reading and haven't stopped since. So, let's let the man speak for himself --

Benj-O: Let's start with a little background. How long have you been writing? And do you have a routine?


BC:  I used to have a routine.  When I was teaching, I'd usually write from 7:00 P. M. or so until around 10:00.  Now that I've gotten old and lazy, I don't follow the routine so well.  I still prefer to write in the evenings, though.
Benj-O: Your talent seems to work equally well with both short fiction andnovels. How are these two formats different when writing (besides length,that is)?
BC:  Oddly enough, the difference is time.  It takes me a lot longer to write a page or two of a short story than it does for me to write a page or two of a novel.  I'm not sure why.  Maybe it has to do with the compression of everything: time, character development, plot.  When you have as many pages as you need, you can be extravagant.  When you have 20 or 25 pages, you  have to condense everything and still tell a good story.  It's tough.
Benj-O: You've created a host of loveable characters to star in your stories (Sheriff Rhodes, of course; Sally Goode; Truman Smith; Carl Burns (mypersonal favorite), among others). Do you prefer one to another?
BC:  I like them all about the same, though I liked writing the Truman Smith series because it was in first person, which I enjoy.  Carl Burns was great fun because I got to write about things I knew about.  Sally Good was fun for the same reason and because she was the only female lead I ever got to do.  And of course Sheriff Rhodes was the first character I developed on my own, and he's the one who's still going.  I know that doesn't answer the question, but it's the best I can do.
Benj-O: So, let's get down to these wild hogs. Why do animals often play so heavily into your stories? Is there something we need to know?
BC:  The truth is, I never really thought about it.  I know that the Rhodes books have a lot of animals in them, and Truman Smith investigated the murder of an alligator and a prairie chicken.  Sally Good had her cat.  I guess the Burns books have fewer animals than the others, but I have no idea why.
Benj-O: Early in the Dan Rhodes series, I believe it was book one, Rhodes' daughter was bowing out of the scene to make room for Ivy. Do you thinkwe'll ever see her again?
BC:  That was in the first book, and she's never been mentioned again.  Or if she has I don't remember it.  I think about her all the time, however, and I wonder if there's a way to bring her back.  It could happen.
Benj-O: When those Hollywood moguls finally take notice of Dan Rhodes, will you sell them the rights outright, or do you plan on being hands on in the process of bringing Dan and the gang to the silver screen?
BC:  If that ever happens, I probably won't still be around to see it.  So I'm selling them the lock, stock and barrel.
Benj-O: And finally, what's next for Bill Crider? Will we be seeing more of Blacklin County's finest, visiting some of our old friends from colleges past (they know who they are), or will we get to encounter entirely newcasts of characters?
BC:  The next sheriff book, tentatively titled THE MURDER OF A BEAUTY (SHOP) QUEEN had been turned in, so that'll be out next year.  I have one sheriff book left on the current contract.  After that, who knows?  I'm writing novels for the e-book RANCHO DIABLO series (DEAD MAN'S REVENGE is currently available for Kindle), and I'm supposed to write a DEAD MAN novel for Lee Goldberg's e-book series.  There'll be more of the RANCHO DIABLO books down the road.
As always Bill, thanks for playing!
Posted by Benjie at 9:15 PM No comments:

Loom & Wheel @ Lulu.com
Don't forget to plug in the code when you click the banner and order one of each of my books!

Posted by Benjie at 6:29 PM No comments: