The Execution of Justice – Michael Phelps 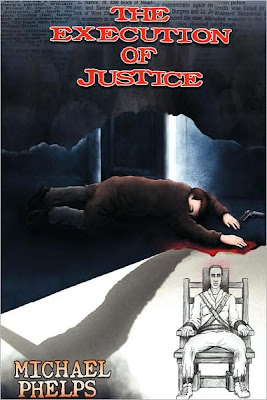 First of all, before you get all up in arms, it’s not that guy. No, this Michael Phelps is a former Chief Investigator for a law firm in . He’s also the co-author (with Ellie Janssen) of David Janssen-My Fugitive.

Sometimes when you find a book you really want it to be a great one. You like the author’s bio, his communication with you as a reader/reviewer. You like the plot and the story as a whole. You like the characters—especially the protagonist. But sometimes, as much as you want to like the book, you just can’t.

Phelps tells the story of a young police officer (Mike Walsh) who rises early in his career to the position of Detective where he is partnered with his original field training officer, Jack Lowell. The story opens as Officer Walsh and his partner respond to a Christmas-time domestic disturbance call that nearly claims his partner’s life. Six weeks later, he is called to the Robbery-Homicide division to find his promotion waiting for him. He discovers that he is a natural in the area of detection, and helps Jack solve a number of both robberies and homicides. There is just one case that keeps nagging at them. They have suspects, but no evidence to pin the crimes on them.

The story itself is good, and the manuscript reads fairly well. The central characters are pretty lifelike. So, what keeps me from glowing and gushing over this new writer that has graced my reading space? As many would like to say, “The Devil is in the details.” And Phelps has an abundance of them. While minutiae is admirable in an affidavit or a field investigation report, it makes for lackluster reading in fiction. Another quirk of the book is the attempt at dialect. Having struggled with this in my own writing, I know that it can be a bear to overcome—getting the right amount of speak/spell without overdoing it. Consequently, the dialectical conversations become more of a distraction than a portrait of the local color.

Finally, some of the plot movements make no sense. Walsh’s promotion, for instance, and the hot-again, cold-again relationship he has with his wife. Phelps makes a stab at explaining these unexplainables, but they are relatively, well, unexplained.

That said, I would like to take a gander at Phelps’ follow-up novel, Justice Delayed, if and when it finds its way to the streets, because he showed so much promise with this first fictional effort and I love to see writers grow in their craft. So I give The Execution of Justice three out of five reading glasses.