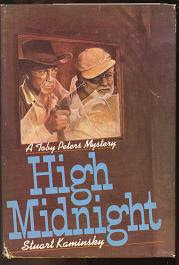 The great American film professor, Stuart Kaminsky (1934-2009), introduced readers to Toby Peters in his debut novel Bullet for a Star in 1977. High Midnight is the sixth outing for the Hollywood private investigator who reminds us of many of the hard-boiled detectives of earlier eras. (Personal note: it’s only my fifth Peters reading—anybody wants to send me an elusive copy of Never Cross a Vampire, I’d be glad to read it.)

Peters himself is an icon from days gone by, practicing his stock and trade in the 1940s. This time, he finds himself wrangled into a case working for none other than Gary Cooper. He’s roped into this one because the dentist from whom he sublets his office (“Sheldon P. Minck D.D.S., S.D./ ‘Dentist and Oral Surgeon’”) poses as Toby in order to meet some of the famous people that he is in the habit of working for. Someone is trying, so it seems, to force Cooper to make a B movie with a handful of B actors, a B director, but a pretty fair script.

Throw in a semi-retired Chicago mob boss, three dead bodies, and a hunting party with none other than Ernest ‘Papa’ Hemingway, and you have the makings for a first-rate mystery story. And, as you might have guessed, Kaminsky through the voice of Peters, delivers. In his methodical fashion, our hero works out the whys and wherefores of the murders, the attempted blackmail, and the (almost) identity theft a couple of steps ahead of the police. Just enough to keep himself from being indicted for the murders!

There are several things to enjoy about a good Toby Peters Mystery: fast pacing, historical references from news and newsreels, and super cameo appearances to compliment the staring roles of some of the greats in the heyday of the silver screen. From Hollywood vernacular, I give High Midnight a hearty thumbs up. For constant readers of these reviews, I attribute five out of five reading glasses.

The Next Christians – Gabe Lyons 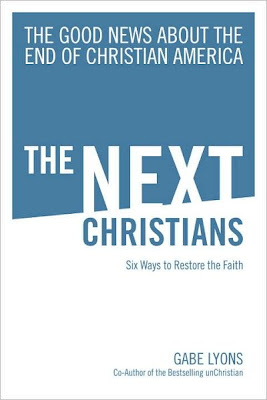 Gabe Lyons is the founder of Q (qideas.org), an organization that studies society and looks for answers. I was first introduced to this young Christian thinker when he coauthored unChristian. I was intrigued, challenged by, and sometimes enraged at the research conclusions that he and co-author David Kinnamon reached. They were not painting a very bright picture for the Christian community, but one that in some circles, is well-deserved.

According to Lyons, these next Christians are adapting to the changing scenery in the western world, not changing their faith, but living it incarnationally. They take their cues from the record of the Bible as a whole not (as he sees it) choosing the fall and redemption stories at the expense of the creation and completion stories. In so doing, he lauds this new generation of Christians for living lives with a view to restoration. He includes a number of examples of people from all walks of life who have seen a need and, without forcing their faith on others, have still let their faith drive their action—to restore the world to the way God had designed it (or take a step toward restoration, at any rate).

While the author hints at this sort of lifestyle occasionally leading to the conversion to gospel-driven faith of those who are influenced by these next Christians, it seems to be more of a happenstance than a purpose. Yes, I will agree that the traditional (20th Century) evangelical emphasis on evangelism at any cost has developed within the Christian community an almost mercenary mindset that ignores the person in order to reach their soul (usually toward the end of marking another tic on the scratch-sheet of ‘souls saved’), I am not convinced that disguising our faith and only mentioning our Jesus is the answer either.

I suppose another struggle that I have with this book is its dismissal of anything over thirty years old. This may not be the author’s intent, but it is the message that comes across. Have we gotten things wrong through the years that should be addressed? The answer would certainly be yes. Should we dismiss all that has gone on over the last three to five hundred years? I don’t think so. If I were to analyze my own response to the message of this book, I would say that what leaves the distaste in my mouth is the tone of arrogance that comes across (which is exactly the message that I believe Lyons would not want to be perceived).

The book is not all bad, but it isn’t necessarily the aid to bringing about change that it wants to be. 2 ½ reading glasses.

[Disclaimer: I received this book for free from WaterBrook Multnomah Publishing Group for this review.]

Posted by Benjie at 9:10 AM No comments:

Henry Melton (I've reviewed a number of his books, so you should recognize the name) is doing something new that readers of his stories will enjoy. It's serialization of new stories. Check them out here.
Posted by Benjie at 8:43 PM No comments: