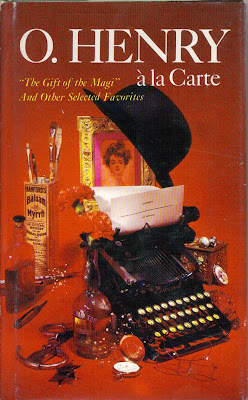 Sometimes finding the right holiday reading occurs at the annual book fair. In June I picked up this little gift book from days gone by at the local hospital fund-raiser. The $3.00 price clip on the dust jacket made this an excellent buy for the holidays in 1973. The seventy-five cents I paid at the fair seemed a good exchange.

As an O Henry fan, I was happy to get a great little collection of his writing at a pocket-change price. Specifically, I was interested in having a simple copy of his famous Christmas story “The Gift of the Magi” (which is the only selection mentioned in the sub-title of this little volume). The collection, selected by Jan Miller Gilmore, includes both short stories and poems by the author.

The poetry leaves a bit to be desired, being much the same as the simplistic verse I was writing in high school. I was mildly entertained by the selection “Nothing to Say” which presents a politician who has nothing to say on the matter and proceeds to discourse ad nauseam on the topic of which he has nothing to say.

Among the short fiction included in the book are (of course) “The Gift of the Magi” which causes me to ask each time I read it, how can one have “sixty cents of it in pennies” when the total amount is $1.87 cents? Also you will find the age-old favorite “The Ransom of Red Chief” which is always good for a laugh and a sigh.

New to me, but well worth the reading were the stories “The Last Leaf” and “Hearts and Hands”. I was not quite so impressed (save with the exercise of superb language) with “Springtime a la Carte”. Another selection that is awkward for the collection is the little two-page snippet entitled appropriately enough “A Strange Story” which provides a good foundation on which to build a story by Edgar A. Poe.

For holiday fare, this is an excellent little volume because it is filled with easily read, wonderfully written stories that touch the depths of the English language while remembering the hearts of the reader. One thing that the editor did well was to anchor the book (begin and end) with two of the more powerful stories (“The Gift of the Magi” and “Hearts and Hands”) included.

As a reader, I’d give the book three stars; as a gift-book, it could easily reach the coveted five-star rating. So, I’ll split the difference for purposes of rating and give O. Henry a la Carte four out of five reading glasses. 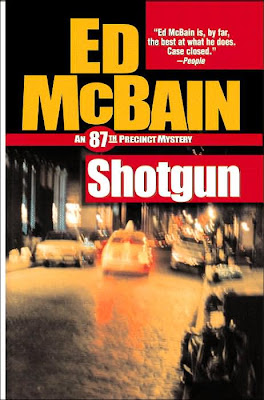 I’ve found a new “go to” collection whenever I’ve run out of good reading material—or when I’m waiting on the next “must read” to hit the streets. I found them down at the 87th Precinct.

Shotgun is another masterful procedural that makes you know that somebody in the seventies and eighties was reading McBain. How else could we explain the resemblance that shows like Hill Street Blues had to the boys in blue at the 87th? At any rate, true to form, Shotgun opens on the scene of a bloody murder—not just a murder but a double murder, and Carella and Kling swing into action.

I think what makes these books work so well is that it doesn’t focus so much on the cops as it does on the crime. True, the cops are the ones that solve the crime, but it is the solving of the crime that is the star of the show. In this case, Andrew and Rosie Leyden have been murdered in their uptown apartment. Not just any murder, but murdered with a shotgun. Not just any murder with a shotgun, but two blasts each to the face. As an afterthought, the murderer tried to make the husband look like a murderer turned suicidist. The job is a sloppy one, though that will not fool even the greenest of beat cops.

Shotgun is a fast read that will while away a few moments when you don’t want to think, but don’t mind a puzzle. Prop up your feet and grab a paperback reissue of an 87th Precinct novel and you’ll enjoy a good story. Shotgun would be a good choice. Four out of five reading glasses. 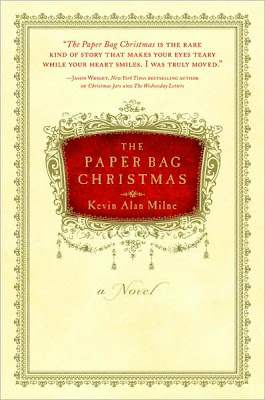 As the Christmas season rolls around, finding new (or new to me) stories with a Christmas setting captures my fancy. This year my habit got a start with a re-issue of a 2006 feel-good called The Paper Bag Christmas.

Nine-year-old Molar (named for his orthodontist father’s favorite tooth) and his eleven-year-old brother, Aaron, are whisked away the day after Thanksgiving to see Santa at the local mall and present him with their wish list. What they found was the most interesting Santa with a more interesting suggestion. After they filled both sides of the paper given them to put “Everything I ever wanted for Christmas . . .” on, the boys are challenged to meet Santa at a local children’s hospital where they will find everything they never wanted for Christmas.

Assigned as elves to help Dr. Christoffer K. Ringle (aka Santa Claus) bring Christmas cheer to a floor full of young cancer patients, Mo and Aaron find themselves in the perfect place to find the real meaning of Christmas.

With an international cast of characters like the Scottish doctor, the janitor/elf from the Bronx (the story takes place in Oregon), and an intriguing but wise patient from , this little book is great holiday fare. Bring a box of tissues with you to handle the obligatory jerk of tears that accompanies any good Christmas story.

s in the telling. The dialogue is a mixture of great and mediocre writing owing most likely to the fact that this is Milne’s debut novel. The awkward writing found mostly in the conversational passages in which Molar sounds more like a boy of fifteen with a limited vocabulary than a nine-year-old with an advanced one do not distract from the story itself.

As regular reading I’d probably give this book only three reading glasses, but because it is the season and it is a Christmas book, and I did enjoy it very much, and I think anyone wanting to read Christmas fare (whatever time they want to read it) will want to read this book, I recommend it with four out of five reading glasses. 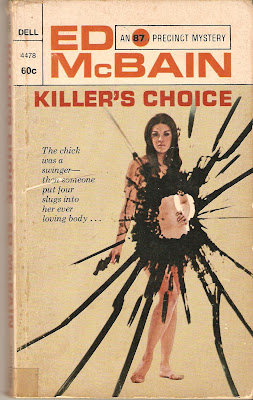 Ed McBain. The name strikes a chord in the hearts of mystery lovers everywhere. Of course, we know that it’s one of the more notable pseudonyms for celebrated novelist Evan Hunter. Still, along with the name our minds jump to the 87th Precinct.

Killer’s Choice is one of McBain’s 87th Precinct stories, and it is an excellent example of why the author enjoyed celebrity as one of the foremost crafters of the police procedural.

The book opens at the crime scene involving the murder of Anne Boone and the wanton destruction of the liquor store where she worked. It is easy to get lost in the pages of the story while following the detectives of the 87th squad. Carella and Kling question suspect after suspect. Among them are the boss, the ex-husband, and a variety of boyfriends. Throw into the mix a green transfer from the much more genteel 30th with a crazy moniker like Cotton Hawes who must redeem a blunder by finding the punk who killed fellow detective Havilland and you have great mystery reading.

Finding Annie’s killer turns out to be a chore that involves a variety of the bulls of the 87th because the suspects’ alibis are air-tight, and with every new suspect we discover a new Annie Boone.

The mystery unfolds pleasantly with just such descriptions and tight concise dialog that includes both interviews of witnesses, suspects and various other characters and the daily banter that occurs between the bulls of the 87th squad room that make life bearable.

Killer’s Choice was my first 87th Precinct novel (though I’ve long wanted to read some of Hunter’s or McBain’s writing), and you can bet it won’t be my last. It’s just entertaining police work. (Four out of five reading glasses.) Though I’ve come late to the precinct and (sadly) McBain shuffled out of his mortal coil, I can relish the fact that I have a whole new set of mysteries to keep me busy when my favorites are between publishing dates.