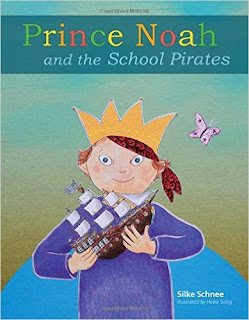 
You may recall when we were introduced to Prince Noah in the story The Prince Who Was Just Himself. He is back—along with his brothers (princes Luke and Jonah) and this time the boys are off to school.


In the fairy tale kingdom where they live, school is different than the school that we know. School is on a ship—the boys on one, the girls on another, the children with eye patches went to school on another ship, those with only one leg on another, and there was even a special ship for the children who didn’t learn so fast.


Adventure begins when all the ships are blown into pirate waters by a terrible storm. All the children are captured and taken to an island where they are imprisoned in a tower. The children all work together using the things they have learned on their separate ships to escape and return home to their families.


This endearing story encourages us to work together to solve problems and remember that everyone is important, even those of us who may be just a little different.


The author has teamed up again with illustrator Heike Sistig to give us another book that highlights the wonder of children who are “just themselves.” Having a child with Coffin-Lowry Syndrome, I find Schnee’s treatment of her own son with Down Syndrome delightful. Especially endearing is her description of her own Prince Noah as “blessed with an extra chromosome.”


Families with special needs children should get a copy of this book. And every school library should invest in a copy of this delightful tale—even if they are in a building and not on sailing ship. (5 reading glasses)

[Disclaimer: I received this book for free for the purposes of this review.]
Posted by Benjie at 3:18 PM No comments:

Renovate: Changing Who You Are By Loving Where You Are – Léonce B. Crump, Jr. 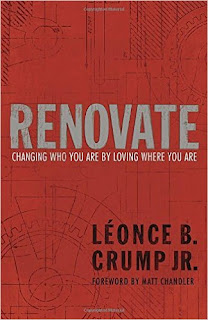 
The author, lead pastor of Renovation Church in Atlanta, is a former professional athlete who loves his town and his calling.


Like any book that approaches the norm from an angle, this book is liable to challenge your traditions as well as get your feathers ruffled because Crump forces us to ask the questions that no one wants to ask—or be asked.


The book has some drawbacks. The author’s love for Atlanta because of first a calling to that great city and followed by his intentional planting of himself there is evident in the amount of time spent in the first half of the book describing the history (good and bad) of the city of Atlanta. It is laudable for the church planter whose calling is to plant in Atlanta to love Atlanta. The take away for others is to fall in love with your place of calling. However, the first chapters, in the guise of supporting a sense of call to place, become an effort to convince all readers that Atlanta is the place (and the only place to serve). With a bent toward overselling his city, Crump almost loses his audience from his actual message—God not only calls to vocation, he calls to place as well.


Another distraction in the book is the intermission included in the middle of the manuscript. The record of the interview between the author and several of his colleagues who are part of his church planting effort does not flow with the rest of the book. If its inclusion was mandatory (on either the part of the author, the editor, or the publisher) for the book to see the printing press, it would be better served as an appendix located at the end of the book. Perhaps the production team felt that (even though it distracted from the message of the book) it might have missed a few readers’ eyes as an appendix, and centrally placing this section would earn it more readers, it still seemed to be less a part of the book and more a piece of the research for the book, and draws a giant question mark as to its inclusion (especially as an interruption).


I am disinclined to totally pan the book though. In a day and a vocational path that trends toward itinerance, Crump calls for longevity. He suggests that perhaps when the minister is answering the call from God to be part of church leadership, that the minister should consider not only the what but the where of that call. According to Thom Rainer, the average tenure of a pastor in a local church still hovers at just under three years (up from when I began my ministry when preachers were staying an average of 18 months). With research also claiming that most effective ministry is done after the 5-year mark, it would behoove ministers to actually plant themselves. The challenge is for those called to vocational ministry to stop looking for their next position the moment the moving truck drives away from the parsonage of their current place of service. Instead, study your place and the people there. Learn how to become one of them, and make your life about your place of calling. (Again this is addressing a God-calling that is often short-circuited by short-sighted men and women.)


The book reads a little slowly because of some of the distractions included in it, but it does have value if only to challenge both ministerial types and church members in general to start looking at their church place as a place to be planted, a place to serve, and a place to become. Christians are to be about the building up of the community—not necessarily changing it to the American dream, but changing it from the heart outward with the love of Christ. Therefore, I rate this book with three and one-half reading glasses. Don’t rush out and buy a copy (unless you want to plant a church in Atlanta), but go ahead and read it if a copy falls into your hands.

[Disclaimer: I received this book for free from WaterBrook Multnomah Publishing Group for this review.]

Posted by Benjie at 2:21 PM No comments: