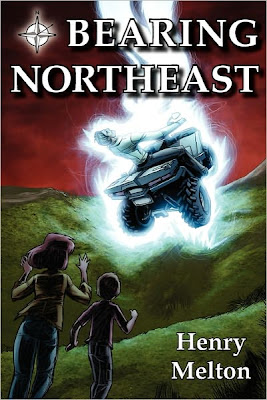 ©2011 Wire Rim Books, Hutto, Texas
This year, Henry Melton has already been busy. Two books have already been released. The first is this edition in the Small Towns, Big Ideas series.
In this episode, Elizabeth (Biz) and Seth are trying to keep life together after losing their parents. They’ve even developed rules to keep them together—with Biz as the guardian of her minor brother Seth. Upon making final arrangements to sell the summer place in Crescent City, California and move back to the house in Fresno, something falls from the sky and damages a tree. That something turns out to be a canister with a semi-broken GPS device inside.
Seth convinces Biz to take a road trip to discover the origin of the device (which has a Northeasterly Bearing displayed) when she gets down-sized at her job. The cross-country adventure takes them through Yellowstone, by the Great Lakes, and on into Canada. The small town involved in this story is actually Churchill Falls, Labrador, Canada. It is a small village where electricity is produced for much of southeastern Canada and even northeastern United States. The local science club is trying to harness some of this energy to do something new.
This one reads like a travelogue, an adventure story, a spy novel, and a Twitter conversation between Seth and his on-line buddies.
The big drawback to this story lies in the occasional tedium that accompanies the space-age stories—even if America’s space program seems to be grinding to a halt in the same year that the story is published. All in all, Melton has shown himself well once again, and his debut of new series The PROJECT Saga is just around the corner (with review in a matter of weeks), so Bearing Northeast earns another four out of five reading glasses.

—Benjamin Potter, July 26, 2011
[This book was provided for review by Wire Rim Books of Hutto, Texas. Opinions are my own.]
Posted by Benjie at 7:00 PM No comments:

Here is a special offer for all my readers--and their friends who wish to take advantage:
Purchase my first two stories for significant savings. 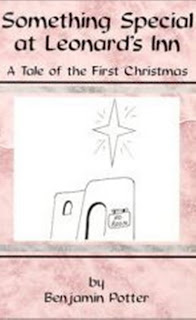 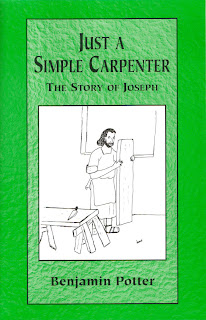 
For even more savings, buy both together for $6.00 (plus shipping and handling) This is the perfect idea for your Christmas gift-giving plans.


Requests for autographed and/or inscribed copies will be honored. Please contact me via e-mail with your name, US mailing address, and quantity request for -- Something Special; Simple Carpenter; or "Gift Package."


Currently I can accept personal checks or PayPal payment only.

For purchases of $20.00 or more, Loom & Wheel will waive the shipping and handling charges.
Posted by Benjie at 2:41 PM No comments: 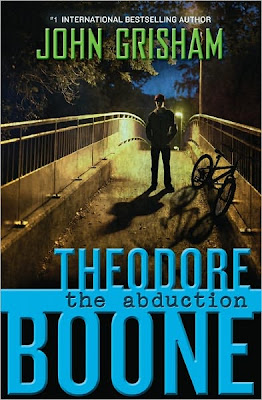 © 2011 New York, Dutton Children’s Books
Theodore Boone is back! When author John Grisham introduced the “Kid Lawyer” last year he suggested that he intended to write a series of juvenile books featuring the 13-year-old legal whiz. His purpose: open up his main genre to a younger audience. The pay-off: another generation of readers to get turned on to the likes of The Firm and The Pelican Brief as they get older. Perhaps he’s onto something.
In this episode, Theo’s girlfriend and classmate, April Finnemore, is missing. The entire town of Strattenburg turns out to look for her and is turned upside down as information begins to surface. Distant relative and general reprobate Jack Leeper has coincidentally escaped from prison in California, has been seen in Strattenburg, and has been known to correspond with the eighth-grader. Police find in him a perfect suspect. Theo’s Uncle Ike offers another choice for the eighth-grade boys to focus on: April’s rarely seen, washed-out musician father.
Action begins with the first sentence of the book: “The Abduction of April Finnemore took place in the dead of night, . . .” and continues page after turning page. Young adult readers will enjoy it; intermediate readers will, too; in fact, Grisham fans of all ages will like the fast-paced stories featuring Theo Boone. This great summer fare warrants four and one-half out of five reading glasses. I, for one, cannot wait for the next story starring my favorite teen-aged lawyer. 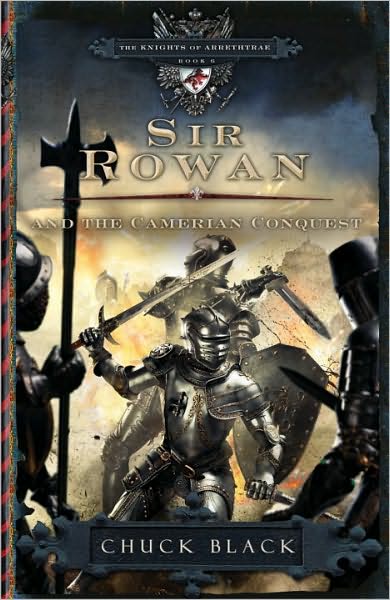 © 2010 Multnomah Books, Colorado Springs
Chuck Black has entered another in the annals of the Knights of Arrethtrae series (apparently the last), and it’s another story well worth reading.
Mixing the popular end times stories loosely based on the book of Revelation from the Bible and his own medieval tales of swordplay and honor, Black gives another astounding, challenging, and entertaining story.
Rowan is an orphan living in Laos (part of the Kingdom of Arrethtrae located in Cameria) where he finds work and lodging as a stableboy. Rowan studies the valiant knights as they participate in the tournaments that have become famous throughout Cameria. A chance meeting with Sir Aldwyn places Rowan on the road to becoming a true Knight of the Prince—committed to the King, His Son, and the Code.
But fame and fortune lure the young knight into the arena of the tournament. And there he finds his niche—although Aldwyn had hoped for better for him.
Captured, bound and left for dead, Rowan realizes too late his mistake and calls out to the Prince. Rescued by an improbable benefactor, Rowan joins the Resolutes in the hills outside of Laos, all the while a mysterious knight in dark armor beckons him to a higher mission.
In closing the series that selects a few of the tales of the Knights of Arrethtrae, Black delivers drama, love, heartache, triumph, regret and triumph again. Here is another thought-filled allegory to add to your reading list. Four out of five reading glasses.

—Benjamin Potter, July 3, 2011
[Disclaimer: I received this book for free from WaterBrook Multnomah Publishing Group for this review.]
Posted by Benjie at 6:44 PM No comments: