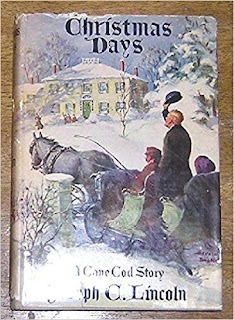 I am a sucker for a good Christmas book. I would probably go so far as to say that the book doesn’t have to really be that good if it has a solid Christmas setting and it may win me over. The Blushing Bride is aware of my affection for Christmas literature, so in the most recent Christmas season (when times had been tough) she found a well-worn and inexpensive ex-library copy of this little gem entitled Christmas Days.

A cursory glance tells the prospective reader that the book covers three Christmases—one in the ‘50s, the next in the ‘60s, and finally in the ‘70s. Having noted the copyright date of 1938, it didn’t take long for me to decide that the Decembers covered were in the middle 1800s. And I must add that I really did enjoy my excursion into the Cape Cod community filled with sailors and ship-masters.

A selling point for the gift-giver (aside from the Christmas setting) was the claim from the fly-leaf (pasted into the end papers in the habit of libraries) that the book promised “shortly to take its place in that select and enduring little group of Christmas classics which began with Dickens’ A Christmas Carol.”

The title is more than just about days during the Christmas season, but follows the lives of two brothers, Rogers and David Day, who come from a line of seafaring captains. During the three important Christmases promised we see the boys grow into men and become ship-masters in their own right.

The writing has an easy pace with a plot line that is easy to follow if not flat out broadcasting intent to the reader. The author’s use of dialect and mid-19th century shipping jargon brings the characters to life although he does have the habit of chopping dialog which forces both character and reader to finish the thoughts of a speaker. I invariably hoped that my conclusion to a statement was the same as that of the character speaking. Whether Lincoln assumes too much of his reader, or just has difficulty smoothing out dialog may be a question better answered by someone who has read more than one of the author’s books.

As for the claim of a seat among the greats of Christmas literature: it’s a good selling point, but maybe more wishful thinking than anything else. I don’t expect to be hearing as much about Rogers Day in future as I already hear about Ebenezer Scrooge, but it is a fair tale. There is more of the Jacob and Esau in the story than the Scrooge and Marley, though I can’t say more without running up the spoiler alert.

The bottom line is this: if you enjoy a nice Christmas story—one with lots of feeling, nostalgia, and miracle—this little tale will provide a few good hours of holiday escape for you. If you like to read about the sea and shipping, Christmas Days has a smattering of it for your taste. If you are looking for a gut-wrenching, plot-twisting, soul-changing, last-for-centuries Christmas classic, you would do well to pick up Dickens’ A Christmas Carol, or Evans’ The Christmas Box, Christmas Days leaves too much detail of the changing in the heart of Rogers Day to fit the bill.

For our rating, I’d give the book three and one-half reading glasses. I’ll probably read it again some Christmas to come, but I won’t give it berth with some of my annual re-reads. Would I be willing to read any more of Lincoln’s “Cape Cod Stories?” The writing is plain enough and certainly free enough of the curse and caper that requires a 24/7 censor to be engaged in the reader’s mind that I would have no problem picking up one of Joseph Lincoln’s books—although he hasn’t won my heart like my good friend Bill Crider did with his mystery stories.

For those who want to hang their hat on a phrase or two to decide whether to give this unfamiliar voice a try, I give you: snow, sailing, and romantic tangles.